I follow a lot of coffee companies and coffee shops on Instagram. We all know this isn’t a surprise, right? Well, this company, Grounds and Hounds came across my feed one day as an ad because every site tracks every little thing. I was curious, as one would be who loves coffee as much as I do, and I clicked (which just fed the little stalker monsters). For every pound of coffee bought, they funnel money back into dog rescue efforts. I’m a cat person, but I’m here for rescuing ALL animals and was happy to part with some of my money for a pound of their Snow Day coffee blend…

I’ll be grinding some of this to make some iced pour over and am so looking forward to tasting it. They even have a subscription service along with an online store with merchandise.

Are you a cat or dog person?

Have a great week!

It’s the first full week of January 2019. I’m still finishing up the Holiday Blend K-cups from Peets Coffee and Starbuck’s Christmas Blend. I’m on that last of both of those and I can’t wait to get into the next pound of coffee beans that I have from a company I found on Instagram called Grounds and Hounds! I’ll go into more of that when I open the bag.

It’s been several years since I’ve seriously bought tea from anywhere other than the grocery store shelf. I can’t even remember where the idea came from to start drinking tea again. I believe I was watching a YouTube gal or read it in a book, I honestly… I don’t know. Yet, here we are.

I used to buy from Teavana, but they don’t sell loose leaf teas anymore (this tells you how long I’ve been out of the loop), so I started looking around for companies with similar teas and found Adagio Teas and decided to give them a try.

I spent about an hour on their site browsing their offerings and reading reviews. I was able to buy three sample sizes and small fan-created tin of tea for less than I spend on a pound of coffee. Each sample envelope makes several cups (up to 5 or more) and they sent me a complimentary trial size of a fifth tea.

I like the idea of samples because if I don’t like it, I haven’t spent a fortune.

The fan tin was a spontaneous add to my cart. They have fan created blends from Doctor Who to Harry Potter and everything between. There are so many to choose from. I love this idea. You can create your own personal blend of tea as well that has nothing to do with movies or television. One day I may get brave and try to create one.

I’ve been drinking tea in the afternoons instead of coffee for the last week or so. I’m enjoying it. I haven’t bought any new paraphernalia for tea. I’m using things I already had, like my Teavana single cup teapot.

Like I said, I’m not quite sure why I’m back to drinking tea, but I’ve also been drinking a crap ton of water, too, so… Though don’t worry, coffee is still my bestest friend in whole world, especially since 4am comes really damn early every morning!

If you’re curious, I’ll list the teas I bought and link to them below…

House of the Brave

Do you drink tea? If so, dish please…

I’m a sucker for it.

But at least I can admit that I’m a sucker for it. I buy Starbuck’s Christmas Blend and Caribou Coffee’s Reindeer Blend in whole bean for cold brew and iced pourover and for use in the Aeropress.

And I have fallen victim this season to buying K-Cups… Peet’s Holiday Blend. I love it. It’s a quick, hot cup of coffee on cold mornings. And I’ve missed the convenience. I know all about re-usable K-cups, so don’t flog me just yet. I just have to not be lazy the night before and pre-fill one. But I have been lazy and well, I’m gonna own it and not feel the shame. 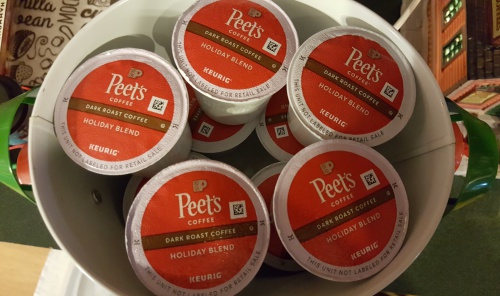 Do you drink Holiday Blend coffee or tea? And have you seen the tea advent calendars? They’re so cute! If I was a regular tea drinker, I would totally be all over one!