Nascar took to the track last night… OR rather, they were supposed to. The rain had other ideas…

So, today, there will be racing! There will be 17 engines fired up and roaring around the track in Daytona at 11am! Next week is full of racing, too, starting on Thursday with the Duels at Daytona, followed by the Camping World Truck race on Friday night, the Xfinity race on Saturday afternoon, and the Daytona 500 on Sunday.

They’ve kinda change things up for this year, in terms of the races. Instead of one long race, they’ve decided to cut the races down into bite sized pieces. They call them stages. I call them shootouts.

Personally, I don’t think it’s going to work at every track. I think the super speedways, like Daytona and Talladega are going to have problems with this format. It takes 10 laps just to get up to speed! My gut feeling is that by mid-season, they’ll have to tweak the format some.

They’re trying to make it more enjoyable and exciting. I guess we’ll see.

They’ve also messed with the points system again so each of these ‘stage races’ will count. None of them are just ride around races. There are points in every part.

How many wrecks are we going to have?

This should be nothing if not interesting. And I could be wrong. Change isn’t bad and sometimes the whole system needs to be rethought and revamped. It’s going to be a long season and it can’t start until the green flag drops so…

(The Clash image courtesy of NBCSports) Yesterday was the Daytona 500. It was bittersweet for me. My driver, Kyle Busch was in a wreck on Saturday in the Xfinity race. His right leg and his left foot are broken and required surgery overnight. END_OF_DOCUMENT_TOKEN_TO_BE_REPLACED

Happy Birthday to Me! 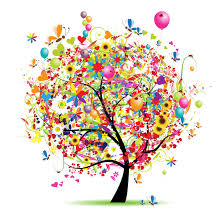 Yep. That’s right. It’s my birthday. Or rather, it’s my real persona’s birthday but she allows me as Lissa Matthews to share it too. 😉

I am taking today off from writing. I always take my birthday off. I will do a little shopping. Some coffee drinking. I will indulge in a birthday cake from my favorite store along with some of my favorite foods. I will spend the weekend having fun, relaxing, indulging, and watching the season’s first Nascar races.

I typically spend a week celebrating, or a month, but I have been terribly busy this year so far trying to get new books written, older books finished, and interesting new ideas percolating. I have one story under contract already and one that I’m waiting to hear back on. There will be at least 3 releases by late Spring and I’m very excited about that, with more releases coming in Summer and following through the rest of the year. This re-starting of a writing career is hard when I didn’t intend to ever have to do it in the first place. In the last year, I’ve grown and learned a lot about myself as a person and writer and friend. I’ve lost some people and gained others. I’ve asked questions I didn’t like the answers to, but have started learning from them. I’m enjoying writing again and I had lost that feeling for a while and wasn’t sure it was going to come back.

I’m learning to own my mistakes, own my reactions, own my failures, and own my triumphs. I’m learning to like me and who I am becoming. And I’m learning that life is way too damn short not to speak up, not to tell someone the truth, not to stay silent when I would rather do just the opposite. I am learning to ask for help, to say thank you when a compliment is given, to keep my nose to the grindstone and not give a shit in certain situations.

I am 42 years old today. And my goal for this year is to continue learning…my craft, myself, my passions, my life.

Birthdays are not a bad thing and I try to keep my head up as I grow older. I am learning and trying to be more appreciative of the days and hours that go by. I am learning who I want to let into my life, who I allow to affect me and who I cherish.

Over the course of the next month, until March 22, some of those people will receive emails from me containing gifts. Gift cards, coffee, sweets, books, or whatever I happen to think they’ll enjoy. I love gifting people for my birthday. It means a lot to me to be able to give to those who’ve made this last year better than expected.

Now, if y’all will gather around, I’ll listen to you sing Happy Birthday! 😉

Have a fantastic Friday and weekend. And remember… we want the #18 M&M’s Camry of Kyle Busch to win the Daytona 500 on Sunday.