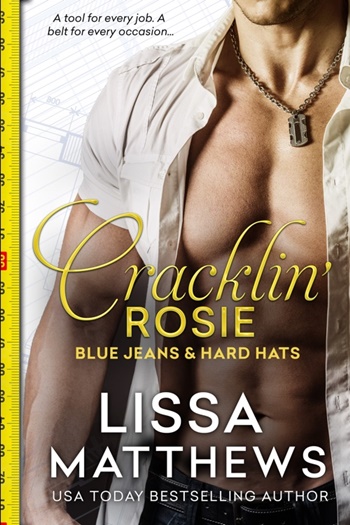 “Have a nice night, Decker. Thanks for dinner.”

She was dismissing him. He took the steps and put the bag of food in his truck. Rosie was still standing on the porch, this time with her arms crossed over her chest and her lips set in a firm, frowning line. Fuck that. He went back to her.

“Rosie, look at me.” She flashed her eyes up at him then away again. “Not good enough.” Decker took her chin in hand and tilted her face up to his. He held it there until she finally looked him in the eye.

“And I told you I don’t believe you. So, tell me the truth so I can kiss you goodnight without tasting vinegar on your lips.”

She fought with herself. He could see it in the confusion swirling in her stare. Her eyes darkened, lightened, closed, opened. She worried her lip between her teeth. She shifted her stance, her weight from one foot to the other. She uncrossed her arms but crossed them back when she didn’t seem to know what else to do with them.

He almost let her off the hook, she was so uncertain and disconcerted. Almost. But didn’t. He wanted her too much.

He knew the minute she gave in. She looked rather defeated and the tension left her shoulders, her neck, her jaw. It was not his intention to break her. He just wanted to get inside her, know her, but she made it so damned difficult behind her defenses.

The pieces suddenly clicked, and he mentally kicked himself for not realizing it the second her walls went back up. “You thought I was rejecting you.” Statement, not question.

She immediately tightened her lips and gave one short shake of her head. Almost as immediately, that look was gone and the defeat returned. He could handle just about anything from her but that.

He kissed her then. Full-on, flat-out kissed her. Tongue, teeth, lips, the whole mouth involved. He wrapped his arms around her body and pulled her so close he could wear her.

When she kissed him back, giving as good as she got, he let it go on as long as he dared, but quickly pulled away. He pressed his lips to her forehead and simply held her. “There is no rejection. There never will be from me.”

“Then why aren’t you staying?”

His eyes bore into hers. “Because I don’t want that to be all you think I want. There’s more than sex, and God knows I want to have sex with you, but there’s more that I want and until you believe that and stop believing me to be your enemy…” He shrugged.

“Really? Coulda fooled me. The acid on your tongue says otherwise. Then again, maybe you just want a spanking.”

Her eyes flared wide and her mouth formed a pretty little O. He kissed her surprised lips just as chastely as he had in the diner earlier in the day, but it wasn’t enough. Hell, it hadn’t been enough before, but they’d been in public and he didn’t think she’d have appreciated being dragged behind the breakfast counter for the kind of kiss he wanted to give.

He easied her close again and slid his tongue inside her open mouth, tasting bananas, pudding, strawberries and her. She was so sweet when she melted against him, let him beneath the layers she kept wrapped around her.

She responded to the kiss just as enthusiastically as she had the previous one until she was all but climbing his body and trying to get inside his skin. He’d never been kissed like that, so desperately, so hungrily and it had all kinds of effects on him. Damn

He tore his mouth from hers and backed her up against the front door of her cabin then reclaimed her lips for one more taste. He told himself that one more was all he could have for the moment, but his body, his mind, his heart weren’t all in agreement.

This time when he lifted his head and was able to look down into her eyes, her flushed face… His resolve was just about broken, and if he didn’t step back right then he was going drag her inside and take her on the first flat surface they came to, most likely the floor.

Her voice was little more than a whisper and her hands clenched and grabbed and pulled at his shirt. She was breathing heavily and she couldn’t stay still, her body restless, swaying into him then flattening back against the door as if she could become part of it.

“About what?” She blushed again in the bright evening light, and his mind flipped through their conversation. Then he hit on what she was talking about. “About the spanking? I didn’t. Not until now, not until your reaction to what I said. I do know that my hand itches when I’m around you, when you start spewing nonsense, being mean, trying to keep me at arm’s length. But more than that, I didn’t really. Except…”

“No one else here knows.”

“Like I said, neither did I, not for certain. I know I’ve wanted to spank the hell out of your ass, but I thought it was just me and the fact that I like it.”

Was that hope or fear in her eyes? Was it a bit of both? He kissed her ear and whispered, “Is that why your tongue is so sharp? Do you want to be pulled over my lap and have your panties pulled down? Is that why you stare at my jeans? Are you looking at my belts before your eyes travel lower? Did you think I wouldn’t notice? You look at my hands too when you think I’m not paying attention. Do you like barehanded spankings too?”

She tried to shake her head, but his hand came up and gripped her hair in a gentle hold and held her steady. “I think we’re going to find out soon.”

She took a shaky breath, and he felt the tremble in her chest. “You can’t say things like that, Decker.”

“Too late. They’re already out there.” He lifted his head, and they stared at one another. Her eyes cleared slowly, and she simply nodded.

A peck to the tip of her nose and he turned away, got in his truck and got the hell out of there. He didn’t think twice about it. She was too tempting. He wasn’t sure what she was afraid of and why she was so prickly, but if she thought she was throwing him off with all her barbs and thorns, she was so very wrong. And with the admission of her little secret, her liking, her craving for spankings… He definitely wasn’t going anywhere.

The drive to Buck and Caroline’s cabin wouldn’t take him long, b ut he hoped it took enough time for his dick to soften. Walking away from her and down the steps hadn’t been the easiest thing to do. His cock was cursing him, his gut was all twisted and his brain was the only part telling him he did the right thing. For the moment.

Rosie loves food. She loves serving it in her small town diner and writing about it in her blog. Her life is full, happy, and uncomplicated, until a large tree limb crashes through her house roof during a storm, and sexy roofer Decker and his tool belt become a tempting complication. Rosie’s not used to being vulnerable, so the idea of Decker behind her with a strip of leather in his hand shouldn’t be turning her on as much as it is.

Decker’s not put off by the prickly woman whose roof he’s fixing. In fact, the more prickly she gets, the more he wants her and turns on the charm. After a few hotter-than-hot kisses, Decker is more than willing to give her every red stripe she’s begging for. Now and forever.