Why do we love athlete heroes?

Hi! Big thanks to Lissa for having me! Do you love athlete heroes? Which sports? Ever since I was in high school, sports romances have always been an auto-buy for me. Whether Susan Elizabeth Phillips’ Football players or Rachel Gibson’s Hockey Players or a host of others, my keeper shelf has long been filled with tons of sports romances (bargain book alert: SEP’s classic It Had to be You and Gibson’s first hockey romance are both available super cheap right now in e-book). Which sports romances are on your keeper self?

While I  love reading about the team sports like baseball and football, I’m not big on following actual teams. I live in the Pacific Northwest where the college teams dominate, but I went to school back in the Midwest—I don’t have any particular loyalty to our local teams. As far as watching sports, the Olympics have always been my Super Bowl. One of my first crushes was on swimmer Matt Biondi–long before Michael Phelps and Ryan Lochte, this 6’7″ American dominated the pool–and his iconic good looks (and teeny tiny suit!) made a permanent impression on my teenage fantasies.

I love the human element in the Olympics—the struggle to peak at just the right time and the toil of training for years against all odds.  The little human interest pieces and behind-the-scenes segments are my crack. Thus, when I saw the call for an Olympics Anthology, I knew I had to do a story. 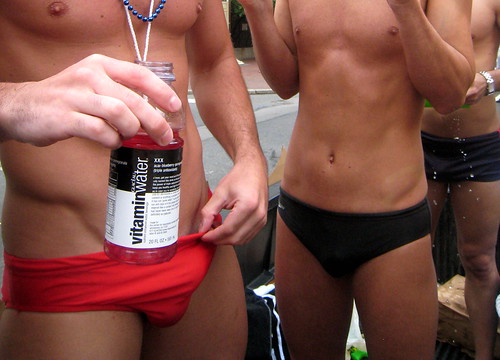 I chose a long-distance swimmer for my story in part because I wanted to create a character apart from the current crop of headline grabbers, but also because I’m fascinated by the guys who put in hundreds of hours of training for one of swimming’s most grueling, thankless races. These swimmers hang out on the fringes of  one the summer Olympic’s marquee sports.

And my hero likes it that way. He likes that his race doesn’t often make prime-time broadcasts and that he can leave the press to the hotshot swimmers who like the limelight. But what happens when an attention-hating hero ends up unexpectedly in the spotlight? Swimming the Distance is my answer:

When denial turns to deception, love may not be enough to keep Kyle and Bodhan’s relationship afloat. Hours before leaving for the Olympics, Kyle Christopher discovers that his long-time boyfriend, an Olympic long distance swimmer, has done an interview where he denied being gay. Despite sharing a home and a dog with Kyle, three-time Olympian Bodhan Petrov  isn’t ready to come out publicly. After Bodhan’s lies start stacking up, Kyle’s not sure he can keep waiting quietly in the shadows. When their estrangement takes a toll on Bodhan’s performance, both must decide where their priorities lay once and for all.

Want a sneak peek at Kyle and Bodhan? Here’s an excerpt from their flight to London:

“You still mad at me?” Even bathed in shadows, Kyle could make out the sheepish expression on Bohdan’s face. His hand kept up a steady massage of Kyle’s knee.

“A little.” Each pass of Bohdan’s strong hand chased away more of Kyle’s anger.

“You did indeed.” Heat spread though Kyle at the memory. Bohdan seemed to have something to prove, but Kyle didn’t know what. Maybe that he wasn’t a complete closet case. Or that Kyle was being unreasonable. “When was the last time we went out?”

Bohdan scowled and removed his hand. “It’s easier when it’s not an Olympic year. The press ignores me.”

Kyle shook his head and went back to staring out the window at nothing. He wasn’t sure exactly when things had shifted. They’d fallen into a relationship with the kind of ease Kyle had never experienced — things went from fucking to cooking dinner together and falling asleep watching Discovery Channel marathons to let-me-clear-space-in-the-dresser-for-your-socks ridiculously, wonderfully quick. But sometime after Bohdan won his first World Championship, after most of his clothes lived at Kyle’s house, after they’d vacationed together, rehabbed the bathroom, and talked about the future in not-so-vague terms, Bohdan’s paranoia had crept in. Winning his second Worlds and the “Olympic Year” push had only made things worse.

“Maybe once this blows over, we can go back to Blue Moon. Make a night of it — get a hotel room downtown and everything. Wanna pretend we’re strangers and pick me up?” Bohdan’s whisper interrupted Kyle’s sulk.

“I seem to remember it working differently last time.” God, that had been one of the biggest rushes of Kyle’s life, coming off the dance floor and colliding into an intense, muscle-bound stranger who seemed to step straight out of his fantasies.

“Yeah. You’re pretty irresistible.” Bohdan returned his hand to Kyle’s thigh, giving him a squeeze. “I saw your red hair from across the bar and then you shook that ass…I was toast.”

Kyle knew Bohdan meant more than just the flight, so he squeezed back. “Yeah.” Or at least, I hope so.

“You should try to rest.” Bohdan tilted his head, concern in his eyes. The only light was the emergency strip along the floor.

Everyone else in first class seemed to be asleep. Kyle flipped up the armrest between their seats. He could almost pretend they were on their couch. Only at home he’d have his head on Bohdan’s chest with his strong arms draped around him. Whereas here he settled for hand holding, knowing it might be Bohdan’s most daring act for the next two weeks.

“That feels nice,” he whispered as Bohdan massaged the fleshy spot between his thumb and forefinger.

“Yeah?” Bohdan scooted closer so their thighs rubbed. He wasn’t quite cuddling, but he’d definitely crossed the straight-guy-personal-space boundary. “I bet I could help you sleep.”

I’ll giveaway an e-copy of the book away to one commenter. Just answer the question I asked earlier in the post: Which sports romances are on your keeper self?