If The Cake Don’t Rise 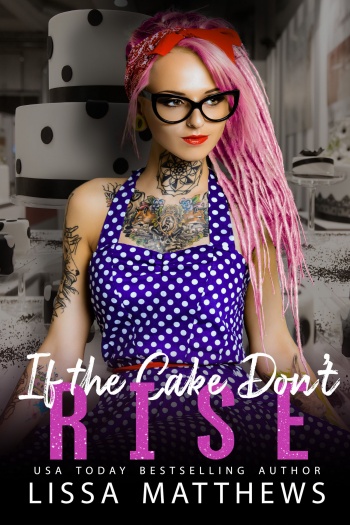 Bryce Campbell is a normal, steady guy. He works, he bowls, he has a collection of classic rock tee shirts. What he is not, is the guy who makes rash decisions, colors outside the lines, or falls in love with the first tattooed, pink haired artist he meets.

Nope. That’s not him. Until it is.

Shelley Criss lives life on her own terms. She follows her gut, does what feels right, and keeps things easy. She doesn’t do drama, lose her head or heart over a man, and she definitely doesn’t fall for the quintessential beige guy who walks into Construct Cakery to pay for a wedding cake he no longer needs.

Nope. That’s not her.

That’s all it takes for Bryce and Shelley to discover love really can happen in an instant.

Shelley shuffled her feet and looked around the quiet neighborhood, repeating the phrase she’d adopted when she and Shane applied for their business loan for Construct Cakery. If the bank had said no, they’d just apply elsewhere. She had walked in holding Shane’s hand and had told him, “If the cake don’t rise, we’ll bake another one and another one until we get the desired results.” He’d laughed at her little analogy and called her goofy, but it had stuck, and she caught him using her twisted little phrase himself.

Her phone said it was one thirty-three in the morning. She had no business standing outside Bryce Campbell’s townhouse at that time or any other time. She had no business wanting him. He was a client or a former client. He was getting over a break-up and it had to be a pretty serious one if they’d been planning to get married, but there was something about him… Something she couldn’t shake. The dampness in her panties from earlier was there. Of course, she was wearing a different pair of panties at the moment, but that was beside the point. The point was that she couldn’t keep it from happening the more she thought about him.

Bryce was quiet. Buttoned up. Maybe even a bit nervous around her. Shelley’d wager a month’s pay that he’d never met anyone like her. And though she’d met quite a few men like him, at least on the outside, what he did to her on the inside was unique only to him. And that…? That freaked her out. It was also the thing that—

“Are you going to actually knock on Bryce’s door?”

Shelley startled at the male voice and threw a hand over her heart as it started galloping in her chest. She turned her head to find a man standing down on the sidewalk holding onto the handle of a rolling suitcase.

Did he have a dead body in it?

Was he going to put her in it?

Why was she thinking something gruesome like that at all?

Not that things like that didn’t happen in nice neighborhoods such as the one she was currently standing in, but that should not have been the first thought that popped into her head.

“How long have you been standing there?”

“Ten minutes, I guess. How long have you been standing there? I didn’t hear a car or a door or anything?”

“Just came back from a business trip. Took an Uber from the airport and you were pretty lost in thought as I walked up. You know Bryce?”

“Yeah. I mean… Sorta.” She didn’t know what else to say, but she wanted to ask questions of the man. He didn’t give her the heebie jeebies and she was again, glad for that reading people ability she had. He seemed more amused than anything. “Do you? I mean, you obviously do, but…”

“We’ve been neighbors for several years,” he said, taking pity on her and answering her fumbled question. “You know, he was recently engaged, but they called off the wedding.”

Was he fishing to see how much she knew about his friend? She couldn’t blame him if so. She’d be asking all sorts of shit if she found someone standing outside Shane’s place in the middle of the night. “I know. We just… We just met today.” Why did she feel she needed to tell him that?

“I should probably leave, huh?” She wasn’t really asking him. More like she was voicing the thought running through her head. The thing was, though, she didn’t want to leave. She wanted to see him. She wanted to hear his voice. She could’ve called for that and maybe she should have. She was always the impulsive one. The thought had entered her head after she’d had a few glasses of wine and half an hour later, there she was, on his doorstep. It was now one forty-seven in the morning.

“Well, I’ll let you get back to deciding.” He started to move off down the sidewalk, but stopped and looked back at her. She hadn’t taken her eyes off his retreating form. “Oh… Do you know anything about bowling?”

“Yeah. Bryce is part of a bowling league. It’s a pretty serious thing, too. Tournaments and stuff.”

Why was he telling her that? Did he think she wouldn’t know how to bowl or that it would somehow turn her off? Not that she’d met anyone who bowled. That she knew of, at least. “I… Thank you. I’ll keep that in mind.”

She could hear him laughing as he and his suitcase passed by the stoop she stood on, then walked up the steps to the stoop next door. He waved at her, then disappeared inside his own house.

A bowler. Huh. Admittedly, that was a new one, but it wasn’t the most pressing thing she needed to work out at the moment. No, she needed to figure out if she was going to knock or not and if she did, what she would say. Hi? Fancy meeting you here? This was why she didn’t need to be so impulsive all the time.

But then the light beside the front door flickered on.

She stood frozen, unsure if she should hightail it out of the immediate vicinity or if she should wait to see what happened. Of course, if the cops rolled up, she’d be in trouble for loitering or trespassing. Shane wouldn’t appreciate that kind of phone call.

Then the faint sound of a chain rattling against metal and wood.

The door cracked open and she saw a blue eye peeking out at her. A sleepy, blue eye. “Shelley?”

She knew she had the deer in headlights stare and for the first time since she made the harebrained decision to drive over to his place in the middle of the night, she wondered what she must look like to him. She had no make-up on. Her pink dreads were piled on top of her head with a bandana wrapped around them. She was in a pair of knee length cut offs and a threadbare paint stained white tee shirt and flip-flops. Her toes could use a new coat of nail polish, too.

She knew she was a sight and she hoped she didn’t scare him.

“Hi,” she said and gave a small wave. He started to smile, but yawned instead, and not for the first time, she felt bad having woken him. Only, she hadn’t, had she?

“Hi.” He stepped back and opened the door and gestured for her to enter. She didn’t give it a second thought. She didn’t try to get away. She didn’t make any excuses. No, she walked over the threshold and wrapped a hand around the back of his head and urged him down for a kiss.

There were also no words.

Shelley sifted her hands in his already sleep mussed hair and he slid his hands up under her shirt. She hadn’t even put a bra on and they both groaned when his thumbs brushed her nipples over and over and over again until she was writhing, caught between him and the door, both hard and immovable.

“Bryce, I…” Another kiss. Another heartbeat. “This isn’t why I came over, but…”

Words were mixed with kisses and heavy breathing.

“Please. I… I need…” She couldn’t put it any plainer. Her need was him and she couldn’t explain that shit at all.