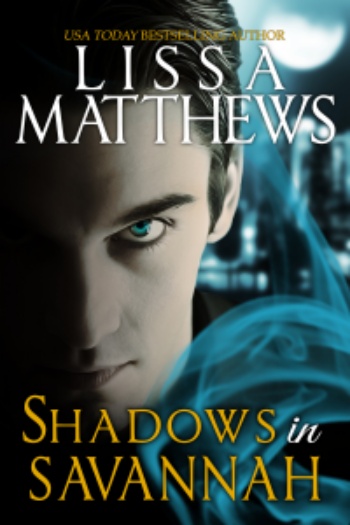 Is the prospect of love worth dying for?

Vampires exist and travel through space and time. Immortal, beautiful creatures. Neither dead, nor living.

Dane has no memory of being human. He only remembers waking after being unwillingly turned. He is left with one single line written upon a scrap of parchment: his human birthday. For this one day a year, he can live and die as a human. He is ready. It is time. 126 years after becoming a vampire, he is ready to let go.

When he meets Jorge, with his dark good looks and brilliant blue eyes, Dane reconsiders his choice. Can he take back the life that was stolen from him by dying? Or can he make a life with a soulmate he never imagined having?

There was an unusual chill in the early evening air for Savannah in October. It wasn’t quite mid-month, yet. Dane could feel it, even with his…condition. He smiled, a wry twist to his lips. His condition. Right. That’s what it was. Like something he could wake up from one day.

Only he never woke up from it. It was there, this nightmare he called living, this never ending existence. He was neither dead, nor alive. He survived on blood and very rare cooked meats. He had money, more than he knew what to do with, more than he could spend in three lifetimes. He could walk in the evenings and in the pre-dawn hours. He could even be out in midday, so long as he never stepped foot in direct sunlight. And with the advances in science, he could appear to have a light tan with a regular application of self-tanning lotion.

He wasn’t like the fabled and fictional vampires in books and movies. Well, not entirely. He could feel, taste, smell, though most things felt odd against his fingertips, tasted bitter or overly sweet on his tongue, smelled like…? He didn’t have a word to describe the smells. Neither acrid nor lovely. Things just…smelled.

A burst of raucous laughter reached his ears and he turned from where he stood against the edge of the walkway, mere feet above the water. His restaurant and pub was in fine form tonight. It was one of several businesses he owned under a parent corporation he’d formed some years ago. Everyone was owned by someone else, so it didn’t look odd to anyone that his corporation owned a bar, a hotel, and a bookstore. There were several other small companies he owned or invested in, but those first three were his money makers.

The bookstore had been a surprise. He loved to read, especially historical thrillers, Victorian erotica, and letters from soldiers who’d died on battlefields. He hadn’t expected the place to make any money, but then he hadn’t counted on the number of people who loved the same type books he did. He also had a section from local Savannah families who’d loaned parts of their personal libraries out to him for display. They were much like museum pieces. Priceless, fragile, exquisite.

The bookstore was where he spent the majority of his time, talking of books and places he’d traveled, showing off the volumes he brought back from various parts of the world. The bookstore was his passion. It was the only thing he had that kept him from taking the step that was closing in on him once more.

His human birthday was the one day a year he and all other turned vampires became fully human. They could do anything any other flesh and blood and beating heart person could do. Even die.

Oh, he could die any other time, as well. All he had to do was walk into a stream of midday sunlight and the life force which held him together would disintegrate and he’d be nothing more than vapor. He wouldn’t sizzle and burn. He’d been told he’d barely feel a thing. Whether that was true or not, he didn’t know. But he was tired, felt as though his soul, what was left of it, was stretched thin and to the point of completely unraveling. Vampires could go mad and there were days, hours where he thought he just might.

Then, he’d lose himself in a book and the feeling would pass, calm would settle in, and he’d be all right. Those times were passing more quickly than they used to and something told him the end was near. Vampires were immortal, but those made against their will felt the call of death in ways those who were made willingly, never did.

It was calling to him.

The thought filled him with peace, though. He didn’t know what lay on the other side, but at times he didn’t care. It could be nothingness or it could be Hell.

Another round of laughter from the bar greeted him as he made his way back toward it. He’d check in with the manager, then head upstairs to his penthouse apartment in his hotel. That was another myth the books and movies got wrong. He didn’t sleep in a dank and dark dungeon away from the light. He slept in a wonderful bed in a room full of windows that faced out over the river. He slept later than he imagined most people did, but he awoke, cleaned up, dressed, and fixed coffee, just as a normal person would.

He loved coffee. It was dark, rich, and the bitter taste when made strong enough, was heaven on his tongue.

He was about to step inside the restaurant, when a feeling of being watched settled over him. He lowered his hand from the door and glanced from side to side. Nothing stood out, no one seemed to be paying him any attention at all. After a few more moments, he shook the feeling off and moved inside.

“Richard,” he said, settling a hand on his manager’s shoulder. “How are things tonight?”

“Couldn’t be better. The surf ’n turf tar tar was a surprising hit. I know I didn’t think it would go over, but once again, you seem to know the palates of the customers better.”

Dane smiled. “I do have a way with that, don’t I? But you? You have a way with the bar crowd. They are in good spirits.” Richard beamed under the well-deserved praise. Dane had lured him away from one of the more prominent restaurants in Charleston and though Richard had been skeptical of the move and the money he’d been offered, it had turned out to be one of the best business decisions either of them had made.

“Bachelor party. They’re on their way to a club later.”

“Well, don’t let them get too drunk. I don’t want to be liable if something happens between here and there because we fed them too much alcohol.”

“Always concerned. I don’t know many men like you.”

You don’t know any men like me, Dane thought. “I’m headed upstairs. I’ll be up for a while still, so call if you need anything.”

There was an exit through the kitchen he could use to get into the hotel kitchen, however, he chose to retrace his steps outside again. That feeling of being watched washed over him as soon as he emerged into the night air.

He didn’t fear whoever it was. He hadn’t feared anyone in more years than he could count. In fact, he felt no fear about anything at all.

No, he was curious. Who would watch him, and why?

With deliberate movement and exact intentions, Dane climbed the spiral, wrought iron staircase that would lead him to the street level balcony of the hotel. Facing the river, it was a second story, but to reach the third, fourth, and penthouse levels, Dane would need to enter the building.

But he didn’t. He sat in one of the rocking chairs that lined the balcony and stared out over the water, all the while, keeping an eye, or ear out, for the one who watched him.

He wanted to call out that he knew the person was there, but he didn’t want to seem like a nut, in case… No, there was no in case. He wasn’t imagining things. There was someone there. In the shadows.

He waited until the air began to lull him into a sense of calm. He never quite reached tranquility, but there were times he came close. Being watched by a stranger, for some inexplicable reason, made him feel that he mattered. Maybe the person meant him harm, and maybe not. But something about Dane mattered to the eyes that didn’t stray from him and for the first time in what seemed forever, he was not invisible. He was not just another resident of Savannah. He was not faceless.

And he longed for it. To matter. He hadn’t ever realized it before that moment, but as he stood from the chair and walked inside the hotel, he knew it did matter.

Other Books in Series