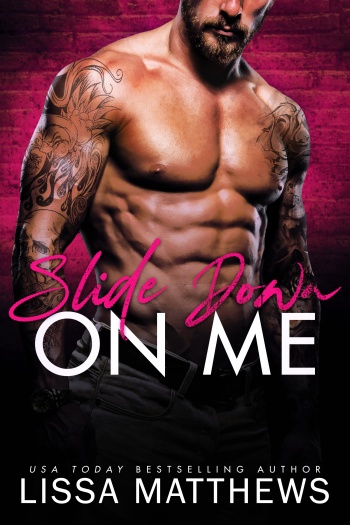 Available as an eBook:

All Other Vendors Smashwords Payhip

Travis couldn’t believe his eyes – Arabella Drake really was back in town. He heard the rumors for weeks, but until she inched her car into the parking lot of his garage, he wasn’t sure he believed them. Yet, there she stood with her beautiful curves, a timid smile on her lips, and in need of his help.

To everyone in their small town, Bella was guilty by association and blood for the underhanded behavior of her brother. But to Travis… She was the one he always wanted, but never got close enough to have outside of his dreams and fantasies.

The repairs on her car cost more than she can pay and he made it a policy to never work for free, so with zero thought for the consequences, he proposes an unconventional solution until she can gather the money together.

He wants her… Sliding down all over him whenever, wherever, however…

Author’s Note: Slide Down on Me was previously published as Dirty Mechanic

By reading any further, you are stating that you are at least 18 years of age. If you are under the age of 18, please exit this site.

An Excerpt From: Slide Down on Me

“People will talk if they see us together.” Regardless of sexual overtones or blatant conversations, his offer to take her home was kind. Heck, it would be the highlight of her week, but… “I mean, as we’ve said, gossip is rampant around here. I don’t want to cause any harm to your business. Guilt by association isn’t fun.” Of course, she had firsthand knowledge of that and she wouldn’t wish it on anyone.

But, that was only one of her objections to accepting a ride from him. Her other was the sheer fact that it was Travis. She wanted his hands out of his pockets and on her. She wanted his cock out from behind his zipper and inside her. She wanted to toss away the respectability she’d been attempting to cloak herself in and get nasty with him the way she’d always fantasized.

If she rode in his truck, mere inches from him, could she trust herself not to reach out?

“Don’t you worry about that. I can handle myself and anyone who may have issues. C’mon now. In the truck with ya. It’s fuckin’ hot out here.”

Bella couldn’t find any other way to argue with him. She stepped off the curb and climbed inside the truck. Once in her seat and strapped in, Travis closed the door and joined her from the driver’s side. She stared straight ahead until they turned the corner between the seed store and vegetable stand on the edge of downtown.

“Why are you being nice to me?” she asked when the silence became too much for the small cab of the old truck. Her entire body and all her senses were aware of him. Dirt, sweat and grease assailed her, but underneath it all was the scent that was nothing but Travis. He’d always had dirt under his nails and oil smudges on his clothes and arms, but he smelled like the country. Fresh-cut grass, hay bales, freedom. It all went against the look of him; hard, inked, pierced. He’d had the tattoos and the ear piercings for as long as she could remember, though. It seemed there was some new piece of art on his body each time she saw him, but he still smelled of spring and summer all rolled into one.

“Why shouldn’t I be nice to you? You didn’t do anything to me.”

His tone was conversational. His posture relaxed with his hands loose around the steering wheel and his eyes focused on the road ahead.

His comfort in her company somehow gave her permission to loosen up, too. “No, I didn’t, but that doesn’t change the fact that my name is Drake.”

“You’re not your brother or his actions.”

At the stop sign, Bella met Travis’ gaze. His eyes were as unreadable as before, even though there was a slight tilt to his lips. She nodded, once again grateful for his straightforwardness.

They headed north on the two-lane road that lead out to her house. Wildflowers in red, yellow, and purple sprouted in the ditches, but open fields soon gave way to trees and shrubs and the lake beyond.

She lived on the quiet, often deserted end of the lake. “You know, I never thought I’d like solitude.”

“I was so used to noise and city life. Nashville was awake and I always had something to do. I didn’t sleep late or go to bed early.”

“I can see where there’d be an adjustment moving back here.”

“There has been. When I lived here before, I thought it was too quiet, then when I first went off to college, I thought that was too noisy.”

“Change can be good.”

“It can,” she agreed. Out the passenger window, the lake glistened under the late-afternoon sun. She’d gone swimming in it when she was younger, along with the rest of the county.

Floating docks dotted the large body of water where the girls would swim out to sunbathe. The boys, including Travis, would waterski or fish or swing out and jump in from long ropes that dangled from tree limbs.

Her guilty pleasure had been watching Travis. She’d done it as discrete as possible. She’d been in awe, fascinated by him, and crushing on him so hard. She’d thought growing up, moving away, and living in Nashville society would cure her of fairy tales filled with hot, sex-in-a-pair-of-jeans Prince Charmings. She’d been wrong.

Several minutes later, the curve of her crescent-shaped drive came into view. Travis veered to the right and Bella tried to quell the pang of disappointment that the ride was over.

He was magnetic, completely at home and yet out of place in this little country setting. Global warming had nothing on the heat of Travis’ thick Southern drawl and the crazy things it did to her.

He pulled to a stop and before she could thank him for the ride, Travis had the truck in park and the engine off. She gaped at him, but he didn’t look at her, only got out and came around to open her door.

“Thanks,” she said, hopping down from the cab.

Travis inclined his head and gave a small smile. “My pleasure.”

She edged around him and was on the second step to the screened-in porch when Travis cleared his throat. Bella turned to find him leaning against the same front quarter panel as he had earlier. He’d crossed his arms over his chest and his feet at the ankles. Arrogance and heat lit his eyes. She couldn’t mistake the latter because it matched her own. Finally, something discernible in the deep-blue irises.

The arrogance made her shiver with uncertainty. “Travis?”

Bella wasn’t sure she’d heard him right. She wanted to think she had, but… “I’m sorry?”

“Sleep with me. You owe me over two thousand dollars. You can’t pay it, not by Friday, at least. You said you don’t have ready access to that kind of cash anymore, so…” He left the words hanging in the air between them.

Travis shrugged at her questions, unrattled.

In truth, she wasn’t as bothered by the suggestion as she supposed she should’ve been. “That’s extortion.”

He wasn’t stupid. She knew that as sure as she knew her own name. Her gaze raked his body, from the top of his head to the toes of his work boots. There was a light sheen of sweat on his inked arms and a bulge in his jeans. He might want her to think he was nonchalant about it. He might want her to think he couldn’t care less, but she’d bet every last dime that he wanted her to say yes as bad as she wanted to say it. “It is.”

“Kind of ugly when you put it that way.”

“Then how should I put it?”

“As a proposition. As an offer of pleasure.” He swung his arms wide and grinned. Shivers of a different sort coasted through her. “Fantasy come true. Pick one, any one.”

Bella laughed and the sound wasn’t as strained as she thought it might be. “Whose fantasy? Whose pleasure?”

“Mine. Yours. Ours. Does it matter? You want me.” His voice was full of cocky confidence. He took several steps forward until he was standing eye level with her, his breath fanning her face. “And I sure as hell want you.”