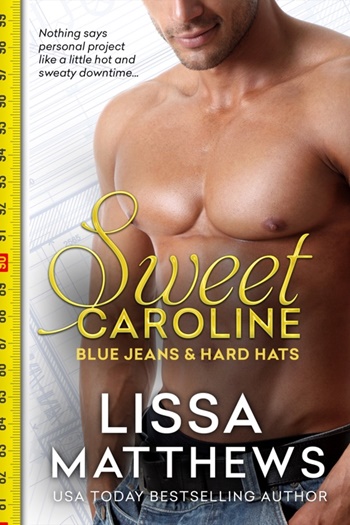 Buck got up from the table and brought the plates over to the sink. “Cheesecake is my favorite, you know.”

“I love cherries too.”

Caroline laughed. “I bet you do. When was yours popped?”

The look of surprise on his face was priceless, with his slack jaw and wide eyes. It obviously had been the question he’d been expecting from her. “When was your cherry popped? I’ll tell you if you tell me.”

Caroline turned toward him holding the knife she was going to use to cut the cake in her hand. He smirked at her, not a bit afraid, not thinking at all that his manhood was in danger. “How much older?”

“About like us, five years or so.. She was my nemesis’s older sister.”

She turned back to the business of cutting the cheesecake. “Usually it’s the best friend’s older sister. Not the enemy.”

“I know, but she was hot and I knew it would piss him off. We kept seeing each other for about six months or so after the first time.”

“Here,” she said, handing him a small dessert plate. The cheesecake had a thick graham cracker crust and a thick layer of cherries on top. “I hope you like it.”

The first forkful was already in his mouth and he was smiling. “Oh my God, Caroline. You should have gone into the cheesecake business instead of gift baskets. I’ve never tasted anything like it.”

She laughed. If the state of Georgia allowed home based food businesses she would have considered it. “Thank you. I’ve been eating this since the first time my grandmother made it at Christmas one year. She always made it for me when I spent the summers with her and my grandpa after that. Eventually, she taught me to make it. It’s my favorite.”

He presented a forkful to her, and she opened wide, closing her lips slowly around the tines. He pulled the utensil back, then leaned in and licked at the drop of cherry syrup on her lip. The lick became a full-blown kiss, and the kiss ended with her body in full-blown arousal. Good God what the man did to her.

“It’s only a cheesecake,” she whispered when he lifted his head and took another bite from his plate.

“No it’s not, Caroline. The love that went into it over the years your grandmother made it for you and the care that went into you making it for us tonight… No, it’s not just a cheesecake. You know better.”

She felt the heat suffuse her cheeks at the compliments. “Thank you.”

“Welcome. Now, eat that slice on your plate. I have some plans for the rest of the cherry sauce.”

It was her turn to be surprised. “How do you know there’s any left?”

“If there isn’t, I’ll scrape it off the top of the cake.”

He’s ready and willing to get hands on with this project.

When Buck finds Caroline looking lost and confused in the local hardware store, this owner of a successful contracting company is ready to play simple handyman and get as hands on as the lady will allow.

Caroline is starting over. Her less-than-blissful marriage to the local golden boy is over, and she’s declared her independence by starting her own business, making time to take road trips…and having her nipples pierced. Once her house is fixed up enough so she can sell it, she’ll be completely done with her old life. Luckily, Buck is ready to show her his skills with a hammer and drill.