5 Reason I Chose to Write M/M by Cassandra Carr

When I was speaking with Lissa recently about my first male/male release,
See the Light, I asked her if she wanted me to do a guest blog on a
specific topic. She suggested “why I write m/m”. I love it when people do
my work for me, so thanks to Lissa! 😉

I love m/m stories. I love reading them, and I loved writing See the Light.
So without further ado, five reasons I decided to write a male/male story.

1. I love men. And what’s better than one man? Two men! Especially when
they’re gettin’ down and dirty with each other.
2. There’s something rougher about the way men relate to each other. Sure,
we love reading those scenes with (to borrow a line from Crash Davis in
Bull Durham) long, slow, deep, soft, wet kisses that last three days, but
there’s also something to be said for the rough, teeth clashing, lip biting
kisses that men seem more likely to engage in. Men don’t hesitate to slam
each other into walls, grab a butt roughly…
3. While there are always commonalities in any two people falling in love,
two men pose unique challenges, not the least of which concerns whether
they’re “out” or not. The two men in See the Light are definitely not
“out”, since one is a professional hockey player and the other is an
adviser and scout. I liked bringing the issue of gays in sports to the
forefront.
4. Men are oftentimes ruled by their penises. We know this. If it’s
interesting watching one guy struggle with that, it’s even more interesting
to watch both of them try to deal with it.
5. In romance novels, there tends to be an emphasis on the happy-ever-after
– marriage! Kids! With a male/male, though gay couples certainly get
married and have children, the happy-ever-after tends to focus more on the
emotion/relationship itself.

So what do you think? Why do you love male/male stories?

Title: See the Light
ISBN: 978-1-62300-201-5
Release date: 2/26/13
Publisher: Loose Id
Word Count: 41,702
Blurb:
Hockey player Jason Monroe lives a double life—star defenseman and
soon-to-be Olympian on the ice and closeted gay man outside the rink. A
serious relationship is out of the question, and Jason makes do with
anonymous sex in barroom bathrooms, not willing to take the chance on
coming out as gay in a decidedly macho sport.

Advisor to the US Olympic hockey team Patrick Parker knows a thing or two
about being a professional hockey player who’s not out. He’s fifteen years
older than Jason, and when he senses the sexy younger man is interested, he
knows he shouldn’t give in to the attraction. The two men can’t keep their
hands off each other, though, and with each heated encounter it gets harder
to hide their relationship. Then their world blows up around them, forcing
them into the limelight. Will their love survive or be put on ice?

Excerpt:
Jason stared at the other man, the lust burning him where he stood. He
moved even closer, like a moth to a flame.
*What the fuck am I doing?*
Apparently Patrick didn’t know either, because his expression became
alarmed. “What?”
*I can’t stop.*
“I need to do this.”
Not giving Patrick a chance to react to his words, Jason grabbed him, one
hand palming the back of Patrick’s head as Jason’s other arm snaked around
the man’s waist, pulling him into Patrick’s rock-hard body. It was obvious
the man kept in shape, despite his playing days being over, and a tortured
moan escaped before he could stop it. Jason dived into Patrick’s mouth as
the passion flared, melting him from the inside out. He hadn’t kissed a man
in years, and he realized how much he’d missed it as the kiss went on and
on, neither man willing to let the other go.
He could feel Patrick’s cock as it lined up with his, and even through
layers of clothing Jason felt the heat pouring off the other man. It made
him want to submit to anything Patrick desired, which confused him.
Honestly Jason couldn’t remember the last time he’d had a man’s dick in his
mouth, but right now he’d give just about anything to suck Patrick off.
Patrick pushed them backward until they crashed into the wall, never
letting their lips separate as he took control of the kiss. With a growl,
the older man reached down and cupped Jason’s ass, pulling their cocks
even closer and rubbing them together. Jason turned his head to the side
with a gasp to break the kiss before he passed out, but Patrick kept at
him, scoring his teeth down Jason’s neck to his pulse point.
“So fucking hot.”

Jared and Bryson started their life together by leaving their childhood homes to make their way west. Ending up in a small community near Livingston, Montana, with a small horse ranch, life is just about perfect for the two men until Jared gives Walt, a Native American drifter and horse trainer, a ride.

Sparks fly in the truck cab and when Jared gets him home, Walt finds himself caught between two hot-blooded cowboys, a place he never expected to be and one he doesn’t want to leave. Their idyllic ménage of love and lust hits the skids though when Jared experiences jealousy and fear. He issues an ultimatum to Bryson and Walt…either they leave, or he will.

Hoping Jared will come to his senses with time and space, Bryson and Walt wait. But after three months, Jared hasn’t budged. On his birthday, Bryson and Walt steal into the house they all once shared and wake him with a kiss, a grope, a thrust of hard bodies, and a birthday spanking he will never forget.

Will Jared be able to conquer his doubts and insecurities, or will he lose the only two people who will fight to keep him?

I am a new author to M/M, however I am not a new reader of it. I have to thank Erica for inviting me to participate in the hop. I agreed readily enough because the outright meanness, harsh unkindness, anger, slander, bullying, hypocrisy, and discrimination against gay, lesbian, and transgender person is appalling. It shouldn’t be tolerated. It shouldn’t even be a question that they are human and have the right to love who and where they will. It is not for me or you or anyone else to judge.

M/M is one of my favorite genres to read and most definitely one of my favorites to write. It makes me smile when male characters speak to me, when they tell me their story of lust and love and desire. They inspire me. I have several favorite authors in the M/M genre and I will be giving away 3 books from 3 of my favorite M/M authors. 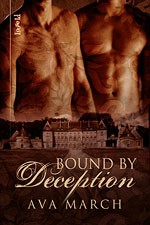 Bound By Deception by Ava March

To win these three books,  you must answer the following question: Who is your favorite M/M author?

Please be sure to visit the main blog hop site for a list of all the blogs, authors, and review sites hopping along.

I will announce the winner Monday morning, the 21st. And myself or my assistant Brandy will contact you.