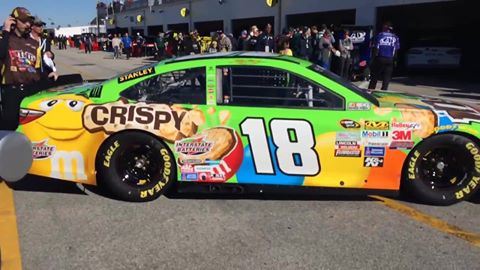 It’s the second weekend in the 2015 Nascar season and while I’m excited that we’re racing again, I’m very bummed still that Kyle Busch is out for a few months due to his accident in Daytona. He suffered a compound fracture in his right leg and a compound fracture in his left foot. He’s had surgery, is back in North Carolina, and at home recovering and resting, but the races just aren’t the same without him in the #18. END_OF_DOCUMENT_TOKEN_TO_BE_REPLACED

Sunday Speeds – Talladega and Staying Out of the Big One!

The boys are racing in Alabama on the superspeedway of Talladega today. The race is starting a few minutes early due to weather concerns. I’m glad Nascar is finally doing this. Starting early rather than cutting a race short at the end. Believe me, the fans and the rednecks will show up no matter when you start it. But they’ll be some kinda pissed when you force the ending.

Superspeedways like Talladega and Daytona has seen some of the most incredible racing (save for those few a couple of years ago where they just ran around the track in single file) and some of the most heartbreaking.

It’s exciting to see them on the track at those speeds, full throttle, huge packs of cars moving together.

One of the things I’ve learned  watching this sport, is that at the speeds they drive, whether on superspeedways or on smaller tracks, once the driver decides to make a move, in that moment, he can’t second guess himself. He had to keep going in the direction he chose, whether he’s making the move alone or taking other drivers with him. If he second guesses himself, like in yesterday’s Nationwide race when Joey Coulter started to move out of line but then changed his mind at the last minute… He was wrecked. He wasn’t able to communicate his change of heart.

Sometimes life is like that. Sometimes writing is like that. Once you choose a direction, dropping to the inside or going up on the high side, it’s often hard to back out of it because you can be wrecked. Going with your gut, be it right or wrong in someone else’s eyes, or in your own hindsight, is always the best policy in my book. Only, I haven’t been doing that with my writing for a long time time. I second guess every word I write, I do things now I didn’t used to do, I hold back… And it burns me every time. Readers are ‘meh’ about my books, reviewers are even worse than ‘meh’ and I’m left feeling like I shouldn’t even bother, day in and day out.

In racing, when you lose your edge, you should probably get out of the car or you’re going to get run over and put into the wall. You’ll cause more crashes than you’ll stay out of.

In writing, when you lose your edge, for whatever reason, you’ll get passed and eventually no one will remember the books you wrote.

Is there a way to get the edge back? I don’t know. I’ve been trying but I can’t seem to quite do it. In the end, we all have to work on our own cars in the garage and our own manuscripts in the folder, hoping that maybe we’ll find that extra bit of something that will keep us competitive and in the race rather than crashed in the middle of the pack, our day ended early, and that sick feeling in our gut again.

Sunday Speeds and a Reader’s Email

The boys of Nascar were in Richmond, Virginia last night well, it didn’t turn out so hot for my driver. He was shuffled back, caught up in a wreck, had loads of damage. I was pissed. I admit it. I’m passionate about my racing as much as I am about my football.

The NFL Draft was held this weekend too and several of my Seminoles were taken. Actually, many of my Seminoles were taken in the draft. Two of my favorites. German born, defensive end Bjoern Werner was drafted into the Colts, and kicker Dustin Hopkins was drafted into Buffalo where he’ll play with Florida State teammate and quarterback, EJ Manuel.

I love the Draft. It’s like re-living college football from last season all over again. And let me tell you, I’m so ready for football season now! Yet, sadly, we have to go through May, June, July, and most of August before we get there…

So, racing was the pits for my driver this weekend, but the draft was good to my boys in garnet and gold.

The second part of this blog is about an email I found this morning in my inbox from a reader. The title of it was More Than This and I couldn’t help but groan as I opened it. I didn’t want to see another email that wasn’t very kind about this book. I loved these characters and  it’s a hard thing for a writer, at least for me as a writer, for so many people to not only not love but not even like these or other characters I’ve written. I think because I put part of me, or part of people I know into what I write that if the reader/reviewer doesn’t like the character then there’s some part of me they don’t like. I know. It’s kinda convoluted, but there it is…

Needless to say, it was not one of those ‘I was really disappointed in this book and couldn’t connect to these characters at all’ emails. In fact, it was quite the opposite and for that I was grateful. As I read on, she mentioned my post from Author Friday and said I sounded down. I apologize for that, to her and to others who read it. It wasn’t meant that way. Oftentimes, I think the reality of a situation, whether it be my perception of reality or someone else’s, can seem like we’re down. There are also those who don’t like reality, don’t like the truth of what is being observed. If anything my post let out some frustration and allowed me to admit, to myself especially some discouragement.

We all want the accolades, the editors begging us for more, the reviewers loving and gushing over us the way they do other authors and books, the multiple contracts, the best sellers lists, the readers who are out telling everyone they know to go buy our books… But, the reality is, we don’t all get that. The vast majority of us don’t. And with the lovely world of social media, it’s in our faces daily, hourly, by the minute and by the second.

It’s the same with incredibly prolific writers. The desire and wish to tap into that ability, but… We’re not all built that way, we don’t all write that way…

Coming to terms with some of this reality isn’t fun or easy or pretty at all. But as long as it doesn’t keep me or anyone else from doing what we love, which is write, then it’s all good in the end.

I write characters I like. It’s hard to not feel responsible while at the same time hard to not say that if you don’t like them then that’s your problem. Same with the actual books. If you don’t like the way I write, then don’t read it. It’s really quite simple. And yet, as writers, we don’t want to alienate anyone. It’s a catch-22. But I’m not down about it. Discouraged sometimes, yes, as we all are, but not down. I still have stories to write, hundreds of them, and that makes me happy.

Emails like the one I received this morning, emails where the only message is one of encouragement and trying to make someone smile… We could all use a few more of those.

In the world of motor sports, Memorial Day weekend is known as Racing’s Greatest Weekend. Between Formula 1 in Monaco and Indy cars racing in Indianapolis followed by Nascar racing in Charlotte, it’s a race lover’s dream.

Speeds will top 200mph and tempers will flair, cars will crash, memories will be made, winners will be crowned, and the fallen will be remembered.

The 2011 Indianapolis 500 winner will not be present, but he is not forgotten. Dan Wheldon died last year in crash in Las Vegas. I imagine his friends and family will have him in the front of their minds today. I know he’s in mine. I enjoyed watching him race.

In today’s Indy race, I haven’t yet decided who I am going to pull for. My mom has been a life-long Andretti fan, from Mario down to Marco, so I could carry on that tradition, but… I do like Scott Dixon, Dario Franchitti, Will Power, and Ryan Briscoe. More than likely, I’ll be pulling for a good race.

Following the Indy 500, will be the Nascar Coca-Cola 600. Y’all know where my heart is for Nascar racing. I’m pulling for that #18 of Kyle Busch, but unless he can get up front, I’m just not sure… From the Camping World Truck race, to the All-Star Race, to yesterday’s Nationwide race, being up front, in the lead, is key. A fast car that does well on the long runs. If the handling of the car goes away on long green flag racing, then the driver is going to have trouble.

It’s hot outside today and it’s going to get hotter. I’ll be sweltering!

There will be a tribute to the military at the 600 as well. It always gives me chills, even in 100 degree heat. I hold the military in very high regard, ever since I wanted to join way back when. This year, Nascar and Charlotte Motor Speedway had it arranged to where tickets could be purchased for members of our armed services so they could attend today’s race. I purchased one of those tickets.

Now, I have work to finish before the green flags drop…