He let go of her nipples and she deflated slightly. His hands on her body burned through her like liquid flames. “What?”

Sitting back with her ass resting on her heels, she waited and watched. Long fingers with colorful designs on the knuckles unbuttoned his 501s. Since they’d hit the market so many years ago, they’d been her favorite ones to see on men. There was something incredibly mouthwatering about a man unbuttoning his jeans that a zipper just didn’t convey. Though, maybe if she were to use her teeth for tugging a zipper down it would make for a sexier argument. He would let her do it. He would let her explore and experiment with him and that made her smile, relax inside.

Once all the buttons were free of their holes, he pushed his jeans down his hips slightly and pulled out his cock. Her eyes widened. “Oh my god.” The more she stared at it, the harder it seemed to get.

His cock was long and thick and she doubted her fingers would wrap around the whole width. That really wasn’t what captured her attention, however. It was the piercings. She’d never seen a cock pierced that way. Yes, she’d seen pictures of cocks with rings and even bars through the head, but…never this, never the shaft pierced. She reached out, wanting to touch him, and as she did so, the skin around the piercings grew taut.

“Yes. Touch me.” His breath hissed out and as if his cock understood what she’d said, it flexed toward her.

Her fingertips took the ring that pierced the head and tugged lightly. His body tensed. The pads of her fingers skipped down the shaft, running over the four bars that were placed at even intervals along the underside. “Do they hurt?” Her hand wrapped around the base of his cock and slid up, tightening until she got to the head, then her grip loosened, one bar between each of her fingers. She’d never seen anything more provocative, more erotic. She thought his tats were hot, his pierced ears too, but this was beyond anything she’d imagined. He was unlike any other man she knew, she was suddenly very glad of that and very glad she’d wandered into his bar.

“Why did you get them?” She repeated the same steps she’d gone through before, starting with tugging the ring, then dragging her hand down the length, to wrapping her hand around him and pulling up.

“No real reason. I liked the idea. It’s different. I kind of liked the little bite of pain, too. It’s expression. And you think they’re hot.”

Oh god, did she ever. As she stroked him, she realized that she was different as well and had been since meeting him. At least, different from what others saw. No one knew she’d find this kind of man ideal…smokin’-hot bad boy, expressive in body and art. No one knew she’d be the kind of woman to leave a bar, well hell, much less enter one, and say yes to a night of uninhibited lust. She was so tired of wearing the mask and she was slowly learning she didn’t have to wear it around him, very glad he was coaxing it from her tightly fisted grip.

Her gaze roamed over his abs and up his chest again. Color was everywhere. In some places on his arms and shoulders, she wasn’t sure there was an inch of skin not covered in ink. How long would it take her to trace each and every one of his tats with her tongue? She’d love to find out.

Letting her vision drop back down to the cock she held in her palm, she reached out with her other hand and cupped his rather large and heavy balls. His groin was smooth-shaven, lacking any trace of hair, and, god, that was hot. She wanted to bury her face against him, inhale deeply, and suckle between his legs.

“You want something,” he ground out. “Tell me.”

Boldly, shyly, she whispered, “I want to taste them.”

And so she did. Tongue, lips and wide-open mouth all explored. The cool metal against warm skin made for an interesting contrast. Her teeth played with the ring, playfully pulling on it until Vinter groaned and started flexing his fingers at his sides. She moved down then, her teeth tugging on each of the barbells, each one drawing a more agonized moan from him than the last.

Vinter is not your typical businessman. Tattoos, piercings and not a suit and tie in sight. He likes his beer cold, his music hard, and his women scorching hot. Until he’s knocked off his game by a suburban doll he can’t stop wanting.

Elise needs a change. In men, in respect, in romance, and most definitely in sex. A recent text message drives Elise into a bar on the outside of town where she meets Vinter: big, bad, and oh so naughty. 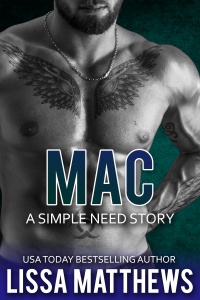