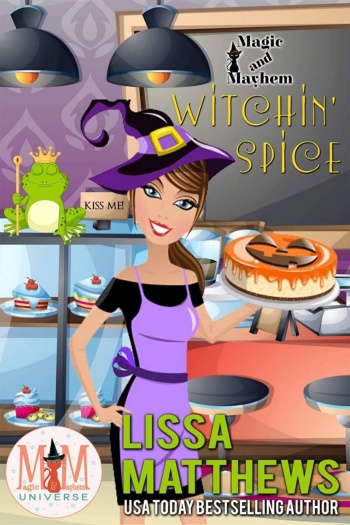 I’d repeated this mantra before leaving my room each of the three mornings I’d been here. Of course, it would probably help if I believed said mantra, but baby steps…

I looked into the bathroom mirror and frowned at my reflection. “What?” I demanded. “Do you doubt me? Well, join the damn club.” Confidence was not my strong suit at the moment.

I’m a witch. Or a magician. Or a strange freaky gal who can flick the fingers of her right hand and people will fall all over themselves in love. Smiles appear on nearby faces with rose colored hearts fluttering about.

I can also flick the fingers of my left hand, and the opposite happens. Tears fall and dark clouds replace sunshine, hearts break, and sadness filters through those around me.

Needless to say, these had been interesting discoveries on my eighteenth birthday. And all accidental, too. I’d wiggled my fingers at my best friend, had a sudden tick at the corner of my eyes, and poof… She and my boyfriend began making goo-goo eyes at each other. The lust was palpable in the room and I was all but forgotten.

Fast forward six years and I was still trying to figure out what the hell was going on. I couldn’t hold a job. I had friends one day and none the next. Life was more than a little topsy-turvy and I was on the brink of checking myself into a hospital.

Then, she showed up. An 80’s reject if I ever saw one. She dropped onto my third-hand couch in a plume of purple smoke. I had to be imagining thing, believing she was nothing more than a hallucination, but then she opened her mouth. “Learn to control your magic, Broomhilda,” she said. “Or I’ll have to confine you to the pokey.”

I was kind of torn between advising that she seek professional help because no one called me Broomhilda… And believing her story that confirmed my witchiness.

She’d smiled and to this day, I’d swear my whole apartment lit up brighter than Rockefeller Center at Christmas. “I’m Baba Yaga.”

My lack of knowledge didn’t faze her. “I’m the head witch. Now, what is your decision? I have a breakdance class in thirty and if I’m late, Fabio will come looking for me and believe me, you don’t want that.”

“Breakdance? People still do that? You do know what year this is, right?” Then again, her choice of clothing and whipped up poke-someone’s-eye-out hair rendered my question moot. But, I didn’t agree to control myself quick enough for her because next thing I knew, she’d whisked me up and dropped me in a pretty little town, deep in the mountains.

“Welcome to Blue Balls Falls, Virginia. A cute little magical town that humans can’t find on any map. Pretty darn clever spell that keeps this place out of sight, if I do say so myself.”

“Whoa. You really need to tell a girl when you’re going to do whatever it was we just did. What am I doing here?” Not that a vacation was a bad idea, but this was a bit out of my comfort zone.

“You’re about to get a crash course in controlling your emotions, your energy, and your magic. You have two weeks. Tops. But probably less. After that, if you’re still unable to rein it in, I’ll have to hide you away in the pokey.”

“Is that your go to? Send everyone to jail?”

“Yes. It usually does the trick.”

“And what do you mean hide me away? That sounds like someone is after me.” She said nothing, and I tried waiting her out, but she wasn’t going to budge. I saw it in the tapping of her foot. I sighed. “Two weeks is just not enough time.”

“Too bad. That’s all you’ve got. Maybe. Oh, and by the way? Can you bake? Are you good in the kitchen at all?”

“That’s too bad. You’ll learn. Or you won’t. Either way, here.” A tightly bound piece of old paper appeared in my hand. “You’re now the proud, if not temporary owner of the town bakery.”

She disappeared as quickly as she’d appeared, and it was then I realized, I didn’t like her. Head witch, or not.

I unrolled the piece of paper, or rather piece of parchment to find the deed to Witchin’ Spice Bakery filled out in my name and signed by a bunch of people I didn’t know.

Three days later, staring myself down in the mirror, I was no closer to knowing or understanding what the hell was going on. I was no closer to learning how to bake, either with or without magic, and what bakery owner doesn’t know how to bake?“At least I haven’t blown up the kitchen since yesterday.” I reminded my reflection. “That’s something, right?” Of course, I hadn’t left the confines of my room since dinner.

I wanted to cry. Again.

It had become a regular occurrence. I cried out of anger, frustration, fear, uncertainty, and sheer annoyance at this whole convoluted situation.

I was staying at the Blue Balls Falls Inn. And I have to tell you, when I walked in the first day after trudging my way down the hill Baba Yaga left me on, it was like stepping back in time. But with magic. Bethilda, the inn keeper, knew my name, had a room for me, and was oh so happy to finally meet me. My attention had been diverted from her to the stairs that creaked as I took them slow and steady. There was no elevator, only staircases that rose up and up and up, far beyond where I could see. Lucky for me, I was on the second floor.

Aside from being the proprietress of the hotel, she was also the town’s oldest resident. Two hundred forty-six. She didn’t look a day over forty. Okay, forty-five, but that might be stretching it. There were no wrinkles on her skin and only a few gray hairs that I could see in her long espresso colored curly mane.

“How did you sleep? Good, yes?” she asked, with an eagerness that seemed to come alive.

To be honest, I had never slept better. Sleeping in different places never bothered me, being from the foster system and all. “Yes,” I answered. “I slept great,” She rewarded me with a brilliant laugh that tinkled in the air like little tiny bells.

“That’s wonderful. Come. I have breakfast ready for you.”

“You do?” I shouldn’t be surprised. She’d been feeding me like clockwork since the day I arrived.

“I do.” She ushered me into a large, crowded dining room. Large in the sense that it exceeded the physical dimensions of the house. “I took the liberty of assigning you a table near the front window. Today’s the big day and the sunshine will do you some good.”

Voices from all directions distracted me for a moment. I couldn’t help wondering if they were all like me? Magical and were they being punished, too.

“How did you…?” She smiled and set a plate loaded with French toast and bacon in front of me. “And how did you know this is what I wanted?” I stared at her with narrowed eyes. “You can read minds, can’t you?”

She was pretty awesome, I had to admit. She’d tried to show me that I could use a little magic to make a bed, and to move clothes from drawers to closets and back again. She’d tried to help me write simple spells for small things. It was like Magic 101, except I was failing every subject.

And my spells? Oh yes, those were quite special. I’d blown up Bethilda’s kitchen at least twice.

I’d melted four pounds of butter all over the floor, causing serious injury to two of her cooks.

I’m not even going to mention the mixer, blender, and coffee maker I’d set on fire. While someone used them.

I appreciated everything she tried teaching me, but this controlled, organized magic thing wasn’t for me.

“Yes, it is. Don’t be so hard on yourself, dear. You’ve only been doing this for a few days. You’re not used to it yet. You’re coming along.”

“I did come up with a new spell last night before I went to sleep, so you know…” I offered. False hope was all I had left.

“A new spell? Well, look at you. See? Doing fine. You’re going to be mastering magic before you know it.”

Her words were supportive and encouraging, but her eyes couldn’t stay focused on me. She didn’t believe I could do it, either.

“Oh yes, I do. I’m… It’s… My kitchen isn’t going to survive your trials and errors.” She looked relieved as soon as she’d finished her statement. I couldn’t say I didn’t understand.

Welcome to Witchin’ Spice Bakery or what’s left of it… My name is Broo. It’s short for…nevermind. Anyway, I’m new here. Like, you know, NEW! So, we’re going to be learning this witch-y stuff together. And I hope you’re taking notes because I may need to sneak a peek at them later.

See, I didn’t know I had these empathic energy-changing magical powers that can make ice and fire shoot from my fingertips if things get too much for me to handle. Not to mention, all this totally makes me a shoe-in on any therapist’s schedule. If I needed a therapist, that is. Which I don’t. Maybe.

And… I didn’t know that being dropped in Blue Balls Falls, Virginia would alert the Wicked Shitz and prompt an unwanted and nasty family reunion with my messed up in the head Papa Warlock. Nope. That was left out of the Baba Yaga travel itinerary.

But of course, it couldn’t just be a quick visit and with a don’t use the magic you didn’t know you had around humans again warning thing. Nope. Because there’s also a cursed frog in need of a kiss, the Prayer Chain that travels in a pack and sticks together no matter what, and a wand that needs a bit of love and understanding.

The blowing up of Witchin’ Spice Bakery, though? Yeah, let’s not talk about that one… 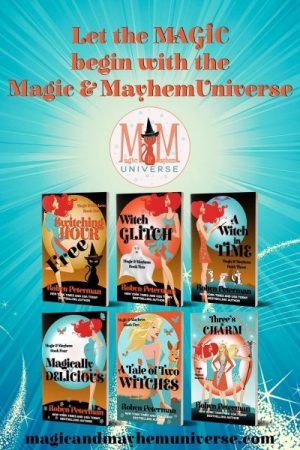 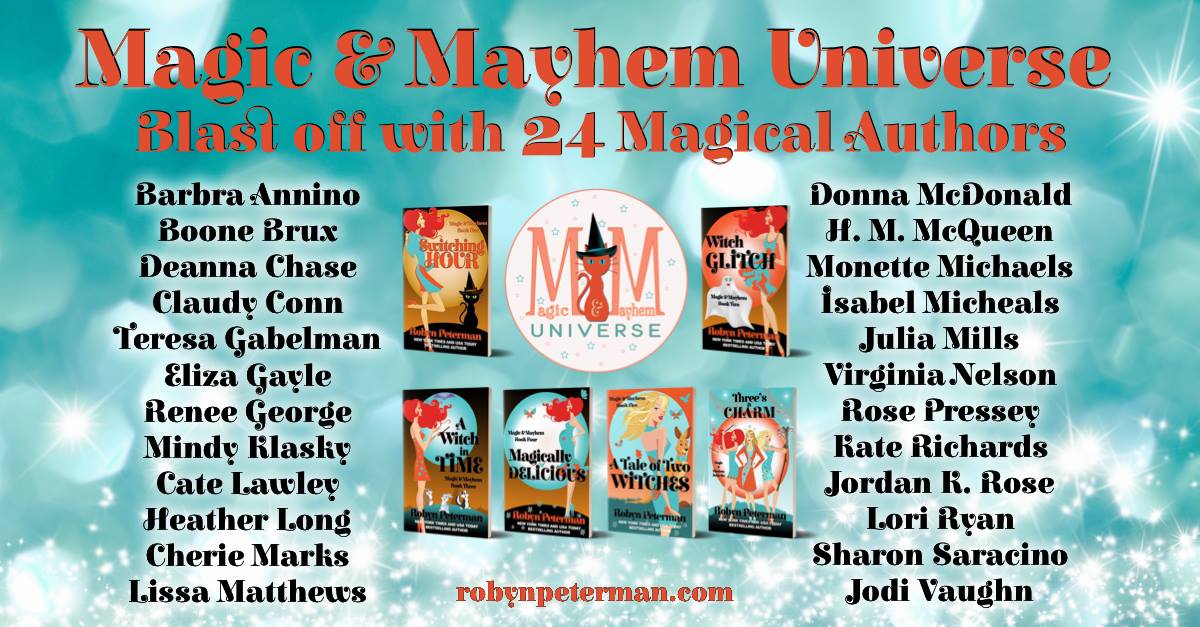