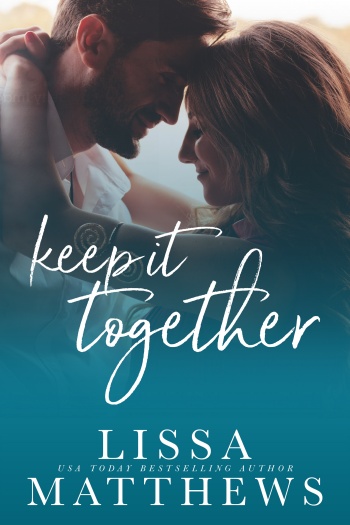 The wayward groom’s half-brother Colt on her porch the next morning gazing at her with concern in his sexy blue eyes, and apologies on his full kissable lips? Uh… Check?

That was six months ago. Now, with a job she loves, her heart mended and her pride put back together, the last thing Chrissie expects is Colt standing behind her saying he’s got an answer for her. Problem is, she can’t seem to remember what the question was.

But Colt does. And as the CEO of a cookie company, it’s his job to pay attention to the details.

Maybe I should have married you instead was what she’d said in the midst of heartbreak and humiliation. She’d been right. She should’ve married him instead and with a blend of persistence and seduction, he’s set out to convince her of the truth of her words that long ago day. But their first kiss is hotter than the southern Georgia days are long and he wonders just who’s seducing who here.

Will she ever trust him? Will she ever believe that he’s not going anywhere? Maybe. If he brings her cookies…

“You’ve given me six months to think about it, and I have an answer for you.”

Chrissie’s head twitched to the side as she finished loading the Browning shotgun. She’d been dreaming about that voice for months, and it seemed that it was invading her days now. That probably wasn’t a good sign. She lifted the gun, lined up her shot, cocked the hammer, and fired. She was so used to the sound in her ear and the kickback of the butt into her shoulder that it didn’t faze her anymore.

“Nice touch with the wedding dress. New style for this year?”

Chrissie’s gaze darted toward the oak tree. “The bridal store didn’t want it back and I didn’t want it anymore, but figured it would be bad luck to for anyone else to wear it, and shooting your brother would’ve landed me in jail, so I did the next best thing,” she explained. That thing being to hang the dress, rig the hanger with rope, anchor it to the tree, and blow so many holes in the gown, she’d had to go get another box of shells within thirty minutes.

What was left resembled some of her grandmother’s lace doilies.

“Chrissie? Will you look at me? Please?”

Definitely not a good idea. “Nope.” She fired another shot. Even though she didn’t hunt anymore and hadn’t for years, she loved shooting. It was a power she could control. Her mother thought it was a terrible hobby for a girl, but her father had ignored the protests and lavished guns, ammunition, and bows and arrows on his only child.

Chrissie liked the focus it took to hit a target. She liked the definitive sound of cocking a hammer and the pressure applied to pulling a trigger. And whereas shooting had been recreational for her in the past, it had helped her get over Russ. If she imagined Russ when she fired at a tin can or a picture tacked to a hay bale… If she shot her wedding dress all to hell between Christmas and New Year’s, well… At least she was over him and rightly so.

That she could crochet an afghan too? That was just something to do when it was too dark and too late to be making a bunch of noise playing with firearms.

“I don’t want to.” I might jump you and rip your clothes off if I do.

“Fair enough. I can talk to your back. My answer is yes, by the way.”

Something in his tone, the way it softened, lingered on the word “back,” sent shivers down her spine, shivers she chose to ignore.

“I was in Atlanta on business,” he continued, “and thought I’d fly down to Savannah to see how you were doing and give you the answer in person.”

“As you can see, I’m doing fine, and I don’t have the slightest clue what you’re talking about.”

Colt chuckled. The sound carried, even on the heavy summer afternoon air. “So, the gun you brought out on the porch when I was here last time wasn’t just for show, huh?”

“I didn’t know you could shoot.”

“Russ said you had some unusual hobbies, but he never elaborated.”

Was he attempting small talk? “Guess he didn’t think it was important.” She tried lining up another shot, but it wasn’t working. Her brain was done concentrating on the gun and the target and kept trying to tell her to turn around and look at the man on her property.

After a few more minutes, she gave up and lowered the gun with a sigh. When she faced him, she was immediately grateful for the fence at her back or she’d have stumbled.

Good God, he looked yummy. His hair was a little longer, curling along his collar, and his brilliant blue eyes…? The ones that looked at her in her dreams with barely restrained lust, were shielded from her now by a pair of aviator sunglasses. That was probably a good thing. She didn’t want to see those eyes full of mild, friendly concern. That would totally ruin the fantasy life she had with him in the deep, dark recesses of her subconscious, sleepy-time brain.